It’s been a long while since I’ve posted updates to my website, but I wanted to share some news about a project I’m really proud to be involved in. Read on to find out more!

Last year, I was invited to write a short play for Truth & Reconciliation of Womyn, a project created and curated by Tony Award-winning actress and social justice activist Tonya Pinkins. The project is an anthology of original short plays and songs by female writers that addresses stories of oppression between womyn throughout history and contemporary times, as a way to build bridges towards healing. It’s an incredible line-up of fellow female writers, and I’m honored to be included. It’s been a privilege hearing these powerful, moving stories, beautifully acted by a rotating ensemble of fierce, diverse womyn, and I’m excited to continue on this journey with this special project.

My play, The Grandmothers, is centered around the Asian comfort women of World War II, a topic I previously wrote about in my one-act play Lola Luning’s First Steps. This new play has given me an opportunity to look at this issue from a different perspective, and gives voice to the Japanese perspective, as well. It was inspired and is set at the comfort women memorial in San Francisco’s Chinatown, seen here:

The Column of Strength by Steven Whyte. San Francisco, CA. Photo by playwright.

In The Grandmothers, an elderly Japanese survivor of World War II is confronted with stories of the Asian comfort women. She must come to terms with her role in denying their justice, and learn that acknowledging other women’s suffering doesn’t have to diminish her own.

We had our first presentation of Truth & Reconciliation of Womyn at Deepak HomeBase on November 13, 2018, and received a nice write-up in The Filipino Reporter. 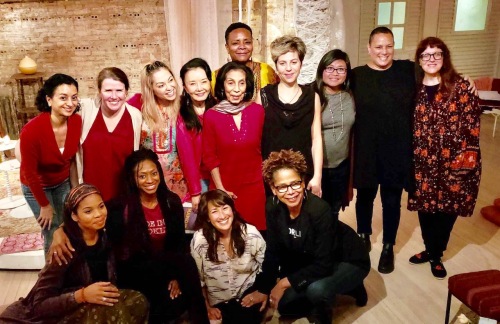 Our next performance is tonight, Monday, February 4th at 7:30pm at The Commons Cafe in Brooklyn, as part of the En Garde Arts Uncommon Voices Series.

To learn more about the project, check out the WBAI Leonard Lopate at Large interview with Tonya Pinkins and Anne Hamburger of En Garde Arts:

Truth & Reconciliation of Womyn will also be included in the inaugural #HealMeToo Festival this spring, which will feature performances, panels, workshops, and podcasts to explore the impact of sexual violence. For more information about the festival, check out the press release on Playbill. We’ll have performances and talkbacks on three consecutive Sundays at 7pm: March 31, April 7, April 14. Each performance will be a different collection of plays and songs (The Grandmothers will be performed on April 7th).

This is an ongoing project, with a planned production in July at the 14th Street Y, so stay tuned! In the meantime, if you’re interested in supporting the fundraising efforts for the production, we will gratefully accept tax-deductible donations here: https://thefield.org/form/make-donation?sa=620277

That’s all for now! I hope to see you at one of these performances.

This entry was posted in updates. Bookmark the permalink.